What is it about kids and pirates?

Aug 4, 2014 | Deals, Discounts and Special Events, Fun Things To Do With Kids in MD, DC, and VA, Pirate Activities for Kids What is it about kids and pirates?  Tell us and enter to win 4 tickets to a Pirate Adventure. 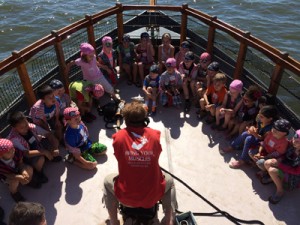 Our job at Pirate Adventures on the Chesapeake is really fun.  When people say to us, your job is so much fun we agree and we know we are lucky to have it.  If you ask the crew what their favorite thing about the job is they will all tell you, it’s the crazy things that the kids say when caught up in the Pirate Adventure.  We are lucky enough to get caught up in the adventure with them and our job would not be nearly as fun if the kids did not bring us along for the ride.  For some reason, kids are inspired by the story of a pirate hunting for treasure at sea.  Many parents tell us that they have never seen their children so engaged in a social setting with other kids.  What is it about pirates that takes kids such a wonderful place in their imagination.  Is it the setting, sailing off into the unknown?  The search for treasure and sparkly things?  The mention of mythical creatures, mermaids and sea dragons?  Whatever it is we love what we do and we look forward every day to helping kids discover their inner pirate and sharing it with their families.

Yo Ho Ho and a Bottle of Milk

Years ago when we opened this business and the Disney Pirates of the Caribbean had just opened (incredible timing) many people told us how lucky we were to be able to take advantage of a fad.  We never worried that the “pirate thing” would go away.  Once you see a five-year old pull a treasure chest out of the water and raise a battle flag you feel pretty confidant that all kids will forever love pirates wether or not the pirate publicity machine is in effect.  A favorite aunt sent us a clipping from a newspaper and it is still on our refrigerator 12 years later.  When we are looking for inspiration, this article never fails.  It is a clipping from a newspaper and there is not a byline in the clipping but we wanted to share it.

The Boy pirate – Yo ho ho and a bottle of milk!
-author unknown

He was the youngest pirate on record, no more than 11 years old.  All that remains of him is a femur, a stocking and a shoe.  He met his death in a terrible Cape Cod storm on April 26, 1717.  Last week his identity was announced.  John King, a boy who lived the dream of many young boys, but all too briefly.

Today we romance the pirate life.  So, evidently, did John King.  When notorious pirate Sam Bellamy attacked and plundered the ship young King and his mother were sailing from Antigua to Jamaica, King demanded that the pirate captain take him as a crewman.  He threatened to kill himself if Bellamy left him behind.  The captain gave in, and John King became a pirate.

“Black” Sam Bellamy was the sort of charismatic, romantic pirate who might actually resemble Johnny Depp’s lovable Captain Jack Sparrow in some ways.  In the bleak world of the 18th century, it is easy to see why a spirited boy would be drawn to this outlaw.

Back then, a child’s life was no carefree playtime.  It could be harsh and cruel, and young boys had to grow up quickly.  A boy born in England in John King’s time could expect to live little more than 30 years.  A pirate’s life?  Why not?

When we agonize over the dangers our children face — from auto accidents, crime, obesity, etc. — we often forget what astoundingly good lives our children lead.  They have more candy and toys than princes and princesses of old could imagine.  The hardest work most will do is picking up their rooms.  Statistically the most dangerous activity they will engage in is riding on the Interstate with their parents while strapped into a car seat.

And so we entertain them with grand tales of pirates and princes, knights, and dragons.  We let their imaginations carry them to dangerous worlds that, thankfully, no longer exist.  Excitedly, they tell us how much they long for a pirate’s adventurous life.  What they cannot know is that we have given them something no boy pirate ever had.  We have given them a childhood.

What do your kids love about Pirates?