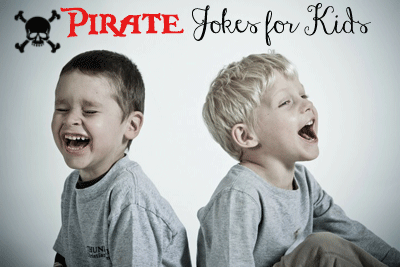 How much did the pirate pay for his earrings?  A Buck An Ear!  Yep, we’ve heard that one a few times at Pirate Adventures.  Kid’s LOVE to tell jokes so we laugh loudly every time a 5-year-old runs up to our front desk with his or her favorite pirate joke.   It’s spring, finally, and we are getting ready to welcome a new crew of little mates on board the Sea Gypsy.  We thought we would assemble a few of our favorite pirate jokes for kids to get everyone ready for pirate season.

The play on the word AAAARGH is endless when it comes to pirate jokes:

What kind of socks does a pirate wear?  AAAARGHYLE

Why didn’t the pirate go to the movies?  Because it was rated AAAAARGH

What’s a pirate’s favorite letter of the alphabet?  AAAARGH

What are pirate’s afraid of?  The DAAAARGHK

Where do pirate’s park their ships?  The HAAAARGHBOR

What is a pirate’s favorite subjest?  AAAAAARGH

Why does it take a pirate so long to learn the alphabet? Because the get stuck at “c”

Why couldn’t the pirate play cards?  Because he was standing on the deck

What did the pirate say when he crashed his ship into an iceberg? Shiver Me Timbers!

How do pirates make their money?  By Hook or by Crook

What do you call a pirate with two eyes and two legs?  Rookie!

How much does a pirate’s treasure cost?  An arm and a leg

Why don’t pirates get hungry when shipwrecked on an island?  Because of all the sand which is there

What is a pirate’s favorite kind of cookie?  Ship’s Ahoy!

Turner round there’s a pirate behind you!

Want more pirate jokes for kids?  Check out this website: jokesbykids.com and find pirate jokes written by kids, like this classic “Where do pirates go to the bathroom?  The poopdeck!”

Other websites with pirate jokes collections

Have fun telling pirate jokes with your kids and we hope to see you at Pirate Adventures this season, bring us your original pirate jokes – we can’t wait to hear them!

Don’t forget to leave a comment below and share your favorite pirate jokes for kids with us.