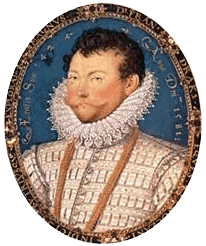 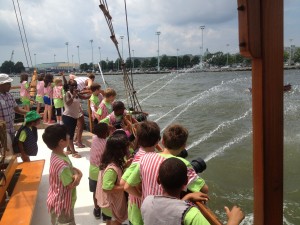 The water cannons at Pirate Adventures are put away for the winter but will return in full force next spring.

Pirate Adventures is closed for the winter and the Sea Gypsy is safely tucked away in her marina on blocks.  We are dreaming of the spring when warm weather will bring little pirates back to Annapolis in search of sunken treasure once again.  As we batten down the hatches we thought we would add to our pirate stories and profile one of histories most controversial pirates – Sir Francis Drake.  Drake is close to our hearts because the builder of our pirate ship the Sea Gypsy shares the same last name and we of course believe some lineage with the famous pirate Sir Francis Drake.

If you are of English descent you probably consider Sir Francis Drake a war hero and privateer.  A privateer is considered different from a pirate as the owner of the ship would possess a commission from the government to seize merchant ships in the event of war.  Without the commission from a government a seizing from a merchant ship was considered valtrex generic piracy.  If you are of Spanish descent you might have a problem with the English reputation of Sir Francis Drake and consider him a notorious pirate, blatantly stealing from the Spanish.

Drake was also regarded as one of the premier seamen of his day.  He was the first after Magellan to circumnavigate the globe and was responsible for the training his crew on the broadside technique in naval battles.

In telling the story of Sir Francis Drake we relied on several sources to complete the tale.  Biography.com has plenty of information on the early life of Sir Francis Drake and his path to the sea.  Historylearningsite.co.uk credits Drake with the development of the broadside, which is often thought of when pirates come to mind in modern times.  The mystery associated with Drakes explorations and circumnavigation continues to fascinate even today.  The website indrakeswake.co.uk is a full resource for Drake’s life and a fascinating account of a man who literally followed “Drake around the world.”

Check out these children’s books to introduce your kids to the English Privateer:

Looking for more pirate fun?  Come aboard our pirate ship this upcoming season and fulfill your little pirates dreams of sailing away in search of sunken treasure.  Check out our post Pirate Stories of Blackbeard to learn about the most notorious pirate himself.  Follow our blog as we post more pirate stories to inspire our little pirates.

← 50 Pirate Gift Ideas for Kids Pirate Festivals with the Kids →